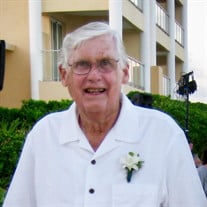 William Aloysius Davis (Bill), 84, died peacefully at home surrounded by his family on November 28, 2017. He is survived by his loving wife of 32 years, Robbie; his son, Jack Davis and his wife Diane; his daughter Tracy Sprinczeles and her husband Artie; his step-son David Wasserman and his wife Beth; his step-daughter Beth McDonnell and her husband Matt; his grandchildren Christina, John and his wife Christine, Kara, Brayden, Emily, and Liam; his great-grandchildren Samantha, Gabe, Mason, and Giavanna; his sister Jackie Churilla and her husband Bob; and many dear nieces and nephews. He is predeceased by his beloved granddaughter Jessica. Bill was born on April 4, 1933 in Queens, New York to William and Margaret Davis. Bill was a beloved teacher of gifted education for over 35 years. He was a loving and supportive husband and father, who was a kind and gentle soul to those who crossed his path. Bill believed strongly in giving back to the community and helping those in need. He was a bright spirit, always smiling, and friendly to all. Bill had a talent for telling his famous “Oscar Mouse” stories to the children. He also had a passion for cooking and never missed an opportunity to try a new recipe. Bill had a great sense of humor and always enjoyed a good laugh. Whether it was out on the boat or sitting on the beach, he loved being near the water. Bill enjoyed fishing, watching a good western, and playing with his grandchildren. He will be dearly missed by his family and friends. A mass in his honor will be held on Thursday, December 7th, at 11:00 am at Holy Infant Catholic Church, 5000 Southpark Drive, Durham, NC 27713. In lieu of flowers, donations to the Ronald McDonald House would be appreciated.

William Aloysius Davis (Bill), 84, died peacefully at home surrounded by his family on November 28, 2017. He is survived by his loving wife of 32 years, Robbie; his son, Jack Davis and his wife Diane; his daughter Tracy Sprinczeles and her... View Obituary & Service Information

The family of William Aloysius Davis created this Life Tributes page to make it easy to share your memories.

Send flowers to the Davis family.