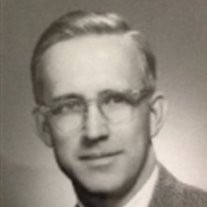 Dr. William James "Bill" Cromartie, 99, of Chapel Hill, NC passed away January 28, 2013, surrounded by family and friends. Born in Bladen County, NC in 1913, he was the son of Dr. Robert Samuel Cromartie and Mary Blanche Jester. He graduated from the University of Alabama in 1933 and earned a medical degree from Emory University in 1937. As an army officer during World War II he headed the biological warfare section of an intelligence mission (ALSOS) to learn the extent of German work in the field of biological warfare and was awarded the Legion of Merit. In 1945, he married Josephine Colter Rule of Cincinnati, a lieutenant in the WAVEs and a cryptographer working for the Navy Department in Washington, DC. After living in Texas and Minnesota, they moved to Chapel Hill in 1951. Bill and Jo were married for 60 years, from 1945 until Jo's death in 2005. Dr. Cromartie joined the faculty of the UNC School of Medicine in 1951, when the North Carolina Memorial Hospital was founded. In addition to his roles as teacher, researcher, and Chief of Infectious Disease Services in the Department of Medicine, Dr. Cromartie served as Associate Dean for Clinical Sciences and the hospital's Chief of Staff. During his tenure at UNC-Chapel Hill, Dr. Cromartie was instrumental in founding a statewide community training system for health professionals in the mid-1960s that reversed a trend toward shortages and uneven distribution of primary care physicians in the state's rural areas. His efforts provided a strong foundation for the North Carolina Area Health Education Centers system. Dr. Cromartie retired in 1985 as Alumni Distinguished Professor of Microbiology and Immunology, Emeritus, at the Univerisity of North Carolina at Chapel Hill. He received the Medical Alumni Association Distinguished Faculty Award and the Alumni Distinguished Service Award. Bill Cromartie had many fond memories of growing up in Bladen County, North Carolina, including his first job piloting the "Lilly," a sightseeing boat on White Lake. Having a house on South River allowed him to spend time hunting and fishing with friends from his childhood. A life-long North Carolinian, Dr. Cromartie enjoyed spending time at the beach, especially the Outer Banks. He was a founding member of the Community Church of Chapel Hill. He is survived by his five children, William James Cromartie, Jr. and his wife Alice Gitchell of Egg Harbor City, NJ; Robert Colter Cromartie, and his wife Louie Cromartie of Chapel Hill; Mary Cromartie Bass of Savannah, GA; John Benjamin Cromarie and his wife Agnes Mallard of Vienna, VA; and Martha Cromartie Henderson and her husband Rich of Madison, WI; eight grandchildren and one great grandchild. He is also survived by a sister, Anne Reynolds of McLean, VA. A memorial service will be held at 1:00 PM Saturday, February 9, 2013 at the Community Church of Chapel Hill Unitarian Universalist, 106 Purefoy Road, Chapel Hill, NC. In lieu of flowers, donations may be made to Heifer International, 1 World Avenue, Little Rock, AR 72202 (www.heifer.org).

The family of Dr. William James Cromartie created this Life Tributes page to make it easy to share your memories.

Send flowers to the Cromartie family.