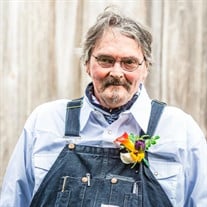 Robert “Rusty” K. Leffell III, 67, of the Cedar Creek community passed away on the morning of July 29, 2021 at Bethesda Healthcare Facility in Eastover. He was born on November 6, 1953 at Womack Army Hospital to the late SGM Robert K. Leffell Jr. and Sarah E. Cole Leffell. He attended several schools between Fayetteville NC, Germany, and finally graduated from Christiana High School in Newark DE. His main occupations were auto and motorcycle mechanic including jobs at Valley Auto World, Rick Hendricks Toyota, and Deal, Bob Marlows Motorcycles, Dick Martin Custom Cycles, and what was formerly known as Cape Fear Harley Davidson. In addition to his parents he is preceded in death by his oldest son Colton R. Carlson and middle daughter Nina D. Leffell. He is survived by his wife of 26 years Christine M. Carlson Leffell, his eldest daughter Denise M. Leffell whom he shared with his first wife Priscilla R. McLeod Leffell of Fayetteville, his middle son Robert K. Leffell IV and wife Kortney N. Sanchez Leffell of Cedar Creek, youngest daughter Sarah R. Leffell Furr and husband Justin L. Furr of Cedar Creek. Grandchildren Colin, Wyatt, Cole, Annaleigh, and Robert V. His brother Paul M. Leffell of North Wales PA, and his brother from another mother Richard “Dick” Martin of Myrtle Beach SC. As well as several nieces, nephews, in-laws, and friends he considered family. If you knew Rusty you knew his “dance of the butter bean “, how he lived his life by the 6 P’s, how he had to hear his blue Grass on Sunday’s, if you asked him what he had been up to he’d tell you “6 foot 2, eye of blue” and he had a story for everything and if he didn’t he’d make one up. He will be missed greatly by his family and those that knew him. There will be a celebration of life but the date is to be announced.

Robert &#8220;Rusty&#8221; K. Leffell III, 67, of the Cedar Creek community passed away on the morning of July 29, 2021 at Bethesda Healthcare Facility in Eastover. He was born on November 6, 1953 at Womack Army Hospital to the late SGM Robert... View Obituary & Service Information

The family of Robert "Rusty" K. Leffell created this Life Tributes page to make it easy to share your memories.

Send flowers to the Leffell family.