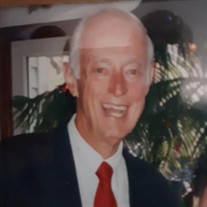 John F Beyer, Jack to all who knew him passed away on the 27th of February, 2021 at 90 years young. Jack was a pillar of his community, volunteering as a Stephen Minister for his Church, Saint Thomas, and for the C.C. Hospital gift shop. He was also well known for his zest for life and being active. Regularly he would be found swimming laps, playing Tennis or Golf, traveling, or just enjoying a nice walk. Jack grew up in Detroit Michigan, and attended Michigan University. During this time, Jack asked his college sweetheart, Patricia A. Ford for her hand in marriage to which she readily accepted. Advice you could always hear from Jack was “Be sure to marry your best friend, then you get to have a life full of love, AND laughter, and the laughter is what makes it easy.” Upon their graduation, the couple were moved to Sassebo Japan, as Jack had entered the Navy during the Korean War. Japan was responsible for sparking their passion of travel, and from that point on they were always excitedly planning their next adventures. They had those adventures until 2004, when sadly after 52 years of marriage, Pat passed away from cancer. Jack was determined to continue to live life to the fullest for him and Pat. Jack was faced with another hard loss in 2011, as his beautiful daughter, Linda Marks, passed away from cancer. Jack was able to be a strong comfort her surviving husband, Michael Marks. In 2005 Jack became very close with friend and neighbor, Nancy McCurry. The similarities between their life events were astounding, all their children born in the same years, and loosing the love of their lives around the same time, they formed a strong bond. They became wonderful companions, and enjoyed traveling together and their weekly date nights. Jack is survived by his children, Kathryn Reeves and her husband Daniel Reeves, Rick Beyer, Craig Beyer and his wife Marie Beyer. Jack was fortunate to spend time with all of his children as they cared for him in his home before his passing. He will be greatly missed by his grandchildren, Jennifer Bayley, her husband Will Bayley, Greg Marks and his wife Dana Marks, Sean Reeves, Brian Marks and his wife Andrea Marks, Carly Beyer and CJ Beyer. His Great Grandchildren, Mason Rodriguez, Allison Reeves, Jack Bayley, Owen Marks, and Eli Jack Marks, who was born just 4 days after Jack’s passing. He is also survived by his companion, Nancy McCurry, and her children, Sarah Sue Smith, and Peggy Lou Wray, and preceding him in death, Alec McCurry. Also, George McCurry and his wife Jackie McCurry, who brought so much care to Jack in his final days. A celebration of life ceremony will be announced in the summer as Covid restrictions are still enforced at this time. If you would like to, donations to the Cancer Research Institute, in Jack’s name, would be a wonderful tribute to this amazing man and the life he lived. - “Money is wasted on new stuff, I already have all the stuff I need, spend it on travel and seeing all the world has to offer.” - Jack Beyer

John F Beyer, Jack to all who knew him passed away on the 27th of February, 2021 at 90 years young. Jack was a pillar of his community, volunteering as a Stephen Minister for his Church, Saint Thomas, and for the C.C. Hospital gift shop. He... View Obituary & Service Information

The family of John F Beyer created this Life Tributes page to make it easy to share your memories.

John F Beyer, Jack to all who knew him passed away on the 27th...

Send flowers to the Beyer family.