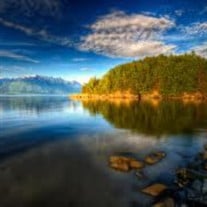 With deepest sorrow, we announce that Jerry Dale Bulls, age 70, our beloved brother, family member and friend passed peacefully on Thursday, July 1, 2021 at 10:46 am. Jerry will be deeply missed by his surviving brothers Bob Bulls (wife Sandy), Spring Lake, NC; Steve Bulls, Franklin, Virginia and Ken Bulls (wife Monica), Franklin, Virginia as well as his sister, Laura Redden of Charleston, West Virginia. Jerry is also survived and will be greatly missed by son and family, Michael Anthony Bulls, wife Karen Stevens Bulls, grandchildren Jack Bulls and Elliot Bulls of Sun Valley, Idaho as well as daughter, Jennifer Kelli Bulls of Raleigh, NC. Having come from a large family background, there are also many aunts, uncles, cousins and many great friends. From an early age, Jerry had a love for drawing and painting. One of his greatest strengths was his faithfulness in writing letters and sending cards to family and friends, especially during the holidays and birthdays. Jerry was well respected for being a hard worker, most notably being employed at Union Bag Camp as well as working on various construction crews. Jerry devoted much of his later years giving his time and energy as a caregiver to his father, Levy Bulls, who passed with Alzheimer’s disease. We know Jerry is now with loved ones in heaven as well as His Lord and Savior Jesus Christ, as the Scriptures declare, “For God so loved the world that He gave His one and only Son, that whoever believes in Him shall not perish but have eternal life.” A private family memorial gathering will be held in the near future. Memorial contributions, if desired, may be sent to HealthKeeperz Hospice and would be appreciated. (HealthKeeperz Hospice – 4155 Ferncreek Drive – Suite 202 – Fayetteville, NC 28314).

The family of Jerry Dale Bulls created this Life Tributes page to make it easy to share your memories.

With deepest sorrow, we announce that Jerry Dale Bulls, age 70,...

Send flowers to the Bulls family.