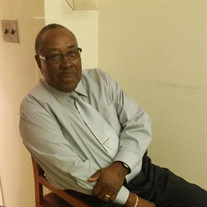 U.S. Army Ret. SFC James Levin Baines, 73 of Fayetteville, NC passed away on Friday, August 13, 2021 at his home with his beloved family members at his side. He was a Retired SFC with the United States Army with 23 years of service. He received a bronze star with Valor while serving. Born on October 1, 1947 to Joseph Baines, Sr. and Anna Bell Baines, of Franktown, VA located on the Eastern Shore of Virginia. He attended and graduated from Hare Valley Elementary School and Machipongo High School located in Virginia. He also attended Fayetteville State University where he received his Bachelor of Business Administration Degree. He enjoyed playing golf, restoring old cars and trucks. Entering in old cars and truck shows winning numerous awards. He enjoyed reading the Bible. He was a member of Jehovah Witness for eleven years. He was baptized December 4, 2010. He served as a ministered servant in the Congregation of the Jehovah Witness. He was preceded in death by his father, Joseph Baines, Sr.; mother, Anna Bell Baines; brother, Franklin Baines, all of Weirwood, Virginia. James is survived by his wife, Annie Lucille Baines, of Fayetteville, NC, for 55 years; a daughter, Shymaine Baines Hall and son-in-law Jimmie Lee Hall, Jr., of North Charleston, South Carolina; a son, Lydell Baines and daughter-in-law Lukisha Baines, of Waldorf, Maryland; a granddaughter, Ashley Baines, of Fayetteville, North Carolina; a great-granddaughter, Paris Baines, of Fayetteville, NC; sister, Jean Rogers and brother-in-law, Robert Lee Rodgers, of Philadelphia, Pennsylvania, ; a brother, Joseph Baines, Jr., and wife Glenda Baines, of Maryland; sister-in-law, Alberta Martin Foster, of Middletown, Delaware; brother-in-law, Charlie C. Martin, of Nassawadox, Virginia; a host of nieces, nephews, cousins, honorary daughters, and friends. We all love him and he will be missed greatly by his family and those that knew him. Scripture: ISAIAH 25:8; New World Translation. “He will swallow up death for ever and the Sovereign Lord Jehovah will wipe away the tears from all faces. The reproach of his people he will take away from all the earth. For Jehovah himself has spoken it.” Online condolences may be expressed at www.capefearcrematory.com Arrangements by Cape Fear Crematory, of Stedman, NC

U.S. Army Ret. SFC James Levin Baines, 73 of Fayetteville, NC passed away on Friday, August 13, 2021 at his home with his beloved family members at his side. He was a Retired SFC with the United States Army with 23 years of service. He received... View Obituary & Service Information

The family of U.S. Army Ret. SFC James Levin Baines created this Life Tributes page to make it easy to share your memories.

Send flowers to the Baines family.