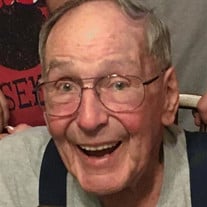 On April 3, 2018, the Earthly life of a dedicated and decorated Public Servant came to a close. Charles F. (Jack) Packer Jr. was the only child of Charles Francis Packer Sr. and Minnie Tate Packer born on June 27, 1935 in Lock Haven, Pennsylvania. Lock Haven held a special place in the heart of Charles as he was baptized there in 1938 at St. John's Lutheran Church along with graduating from Lock Haven High School in June of 1953. In his 50th class Reunion publication Charles shared a memory from his graduation ceremony where his Principal came up to him and said, "Congratulations Jack, I never thought you would make it." After Graduation, Charles entered into Public Service by enlisting in the US Army in March of 1954, where he would serve honorably until his retirement as a highly decorated Sergeant Major for the 82nd Airborne Division on July 30, 1984. His deployments included Korea for 12 months in 1955, Vietnam for 18 months in 1966 and Korea again for 12 months in 1978. In addition to his deployments, Charles and his family were stationed various places across Germany. These moves began with Heidelberg in 1961 and were followed by Landstuhl in 1962, Frankfurt from 1963-1965, Munich in 1968 and Zweibrucken in 1970. The home stretch of Charles' military career was spent stateside beginning with Pittsburg in 1971, New Cumberland, PA in 1973, Atlanta in 1974 and completing the cycle of moves in January of 1978 with Hope Mills, NC. Charles met his wife, Mary Packer, in Manchester, GA September 4, 1956 and the two were wed on New Years Eve of 1958. While stationed in Frankfurt, Germany in 1963 their oldest daughter, Jacki, was born. Their second daughter, Dotty, was born just under two years later in Frankfurt, Germany. To finish off the German trifecta, their youngest daughter, Patti, was born in 1970 in Munich, Germany. Following Charles' military career, he engaged in several other ventures with the first being working with Sears for ten years. Following Sears, he worked at Dupont for ten years. Though he enjoyed working at Sears and Dupont, Charles' real passion was his volunteer position with the Grays Creek Fire Dept Station 18. Charles spent 31 years serving with the Fire Department and earned several awards in his tenure including multiple Fireman of the Year honors. He prided himself on helping others through service, even if it meant simply taking cold drinks to the calls that came in on hot days. You would seldom catch Charles without his Station 18 Trucker Hat he wore proudly along with his iconic suspenders. Charles was a Freemason with the Friends on the Lahn Lodge No. 860 and an avid coin collector. His passion for coin collecting led him to join and become actively involved in the Cape Fear Coin Club. Charles was a family man and loved to spend time with them over meals, sporting events and camping trips. He was a man that loved to travel and treasured his airstream and the free overnight parking at Walmart. Charles is survived by his wife Mary Packer, three daughters Jacki Smith, Dotty Smith and Patti Packer Draughon, Sons-in-law Tim Smith and Darryl Draughon, Grandchildren Stephanie Smith Miller, Drew Smith, Spencer Faircloth, Noah Smith and Gracie Draughon, Grandson and Granddaughter in-law Roger Miller and Jessica Smith, his two Great-Grandchildren Henley Miller and Hudson Miller, and his Dog Buddy and two cats Dolly and Gabby. The family will be holding a memorial service Thursday, April 12th at Gray's Creek Fire Station 18, 7010 Fire Dept Rd, Hope Mills, NC. The visitation hours will be 5pm-7pm with the memorial service beginning at 7pm. In lieu of flowers, donations can be made to the SPCA or the charity of your choice. A Military graveside burial service with honors will be held at the Sandhills Veteran Cemetery on a later date. The following quotes will give you great insight into how Charles lived and viewed life: "You can tell alot about a fellow's character by his way of eating jellybeans." - Ronald Reagan "Sometimes if you want to see a change for the better, you have to take things into your own hands." - Clint Eastwood "Whoever thought a tiny candy bar should be called fun size was a moron." - Glenn Beck "God will prepare everything for our perfect happiness in heaven, and if it takes my dog being there, I believe he'll be there." - Billy Graham

On April 3, 2018, the Earthly life of a dedicated and decorated Public Servant came to a close. Charles F. (Jack) Packer Jr. was the only child of Charles Francis Packer Sr. and Minnie Tate Packer born on June 27, 1935 in Lock Haven, Pennsylvania.... View Obituary & Service Information

The family of Charles "Jack" Packer Jr. created this Life Tributes page to make it easy to share your memories.

Send flowers to the Packer family.