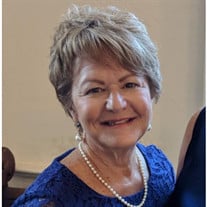 Barbara Mary Coy became an angel on Sunday November 3, 2019 in Wilmington, NC. Because of her untimely death, Barb gave the gift of organs to deserving families. Barbara was born to Rose and Edward Mattia on March 15, 1957 in Rome, NY, the third of four children. She was born into the hustle and bustle of a large Italian family. Because she was “vertically challenged”, she learned early on to stand up for her beliefs. This was the personality we knew and loved. Barb graduated from Crouse-Irving School of Nursing in Syracuse, NY, in 1978. This is where she met her husband of 41 years, Jerry. As an Air Force wife, she traveled with Jerry to California, where their daughter, Amber, was born. Then to the D.C. area, where their son, Jeremy was born. The AF sent them to Biloxi, MS and eventually they settled in NC. When their children were in high school, they were blessed to include Gina into their family. Barbara was always game for anything put way. She loved camping, NASCAR, and backyard get togethers with friends and family. Her family was her world and she would do anything for them. Her love was unconditional. Her laugh her was infectious. All jokes were funny to her. Everyone was a potential friend. Barbara is survived by her mother, Rose Mattia of Rome, NY, husband, Jerry Coy, Hampstead, children Amber (Jim) Brekhus of Wilmington, Gina (David) Blackwell of Wilmington and Jeremy (Sunny) Coy of Hampstead. She leaves behind her beloved grandchildren, Hannah and Landon Brekhus, and Dyer and Evan Mae Coy. She is survived by sister Beverly Nasci and brother Eddie Mattia and their spouses. She is also survived by nieces, nephews and cousins. During her nursing career, Barbara’s passion was women’s health. She has worked labor and delivery, home health, and was passionate about her time at WHAT treating high risk teens. During this time, she became a sexual assault nurse examiner and an advocate for the sexually abused. Because of involvement in “needs based” woman’s health, the family wishes donations be made to Planned Parenthood at weareplannedparenthood.org in lieu of flowers. Services for Barbara will be at noon November 23 at All Saints Catholic Church, 18737 US-17 Hampstead, NC. A Celebration of her life will follow at 1:30 at Leaf and Barrel Provision Company, 15010 US-17, Hampstead, NC.

Barbara Mary Coy became an angel on Sunday November 3, 2019 in Wilmington, NC. Because of her untimely death, Barb gave the gift of organs to deserving families. Barbara was born to Rose and Edward Mattia on March 15, 1957 in Rome, NY, the... View Obituary & Service Information

The family of Barbara Mary Coy created this Life Tributes page to make it easy to share your memories.

Send flowers to the Coy family.