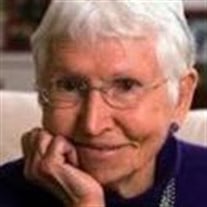 Anne Byrd Firor Scott, 97, passed away peacefully on February 5 with her family at her side. She was the W.K. Boyd Professor of History emerita at Duke University. A sixty-year resident of Chapel Hill, she lived in the Highland Woods neighborhood for 47 years, and at Carol Woods Retirement Community for the last 14 years. Scott was born to John William Firor and Mary Moss Firor in Montezuma, Georgia on April 24, 1921. She and her three younger brothers grew up in Athens, Georgia, where her father taught agricultural economics at the university. He believed that his daughter should have the same opportunities as his sons, and Scott graduated from the University of Georgia with honors in 1940. After a year working for IBM in Atlanta, she studied at Northwestern University, earning a master's degree in political science. With many men in uniform, new opportunities were opening up for women. In 1943 she moved to Washington, DC to participate in a public service internship program. After working in a congressman's office, she was hired by the National League of Women Voters in 1944. In 1946 she met Andrew Scott, a former navy pilot who had started graduate school at Harvard. They married in 1947 and she enrolled in a PhD program in American Civilization at Harvard. As was then the norm, her career followed his, and they moved first to Washington, then to Hanover, New Hampshire, and then on to Haverford, Pennsylvania. By the time she completed her PhD in 1958, she was the mother of three children. When her husband was hired in the political science department at UNC-Chapel Hill in 1958, they moved for what would prove to be the last time. In 1961, after a male professor left the Duke History Department, the department chair asked if Anne Scott could come teach "until we can find somebody." She retired from Duke thirty years later, having been the first woman to chair the department. Scott was known as a demanding and inspiring teacher. She favored discussion over lecturing and every student was expected to participate. A former student wrote that, "Multitudes of students remember her classes as one of the peak experiences of their years at Duke." As a scholar, Scott was a gifted researcher and a lively writer. Of all her published works, the most influential was "The Southern Lady: from Pedestal to Politics 1830-1930," published in 1970. The book opened up new horizons in social history. For decades, and on into retirement, Scott mentored dozens of scholars who developed the field of women's history. Among the many honors she received, one stands out. In July 2014, at the age of 93, Scott received the National Humanities Medal from President Obama in a ceremony at the White House. For thirty years, Anne and Andy spent part of each summer at a home on the south shore of Nova Scotia. They became almost as much a part of that community as they were in Chapel Hill. Her husband Andrew MacKay Scott died in 2005. She was also preceded in death by her brothers David, John and Hugh Firor. She is survived by her daughter Rebecca Scott (Peter Railton), and sons David Scott (Anne Geer), and Donald Scott (Cecile Fraley). She is also survived by her six grandchildren: John and Thomas Scott-Railton, Will Scott (Ashley Heger), Sarah Scott (Gabriel Chocron), Paxton and Abigail Scott, and by great-grandson Lucas Chocron, and sister-in-law Edna Firor. The family deeply appreciates the remarkable Carol Woods community, and particularly those who took such good care of Anne Scott in her final years. There will be a celebration of Anne Scott""s life on Sunday, March 3 at 2 o'clock at Carol Woods Retirement Community, 750 Weaver Dairy Rd., Chapel Hlll. In lieu of flowers, memorial donations may be made to Chatham Habitat for Humanity P.O. Box 883, Pittsboro NC 27312, chathamhabitat.org. Online condolences may be sent to [email protected]">[email protected]">[email protected]">[email protected]

Anne Byrd Firor Scott, 97, passed away peacefully on February 5 with her family at her side. She was the W.K. Boyd Professor of History emerita at Duke University. A sixty-year resident of Chapel Hill, she lived in the Highland Woods neighborhood... View Obituary & Service Information

The family of Anne Byrd Firor Scott created this Life Tributes page to make it easy to share your memories.

Send flowers to the Scott family.