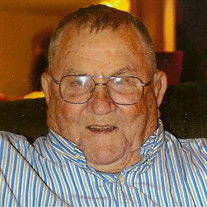 Willie Edward Ellis, 84, of Fayetteville, passed away Thursday, Feb. 5, 2015, in Cape Fear Valley Medical Center. He was born Dec. 13, 1930, to the late Jesse and Julie Soles Ellis of McColl, S.C. He received a Bronze Star as a Korean War veteran of the U.S. Army. He was employed by AAFES as a cook at Fort Bragg Army Base Bowling Alley. He was predeceased by his first wife, Nancy Scott Ellis; his sons, Willie E. Ellis Jr. and Michael Ellis; his second wife, Joan Mauldin Ellis; and two sisters and two brothers. He is survived by his brother, Luther Ellis of McColl; his granddaughters, Nancy Ellis-Oxenford of Clayton, and Sabrina Lipford of Shelby; three great-grandchildren; sisters-in-law, Tula Satterfield of Emerald Isle, and Elizabeth Dale Mauldin of Norfolk, Va.; numerous nieces and nephews; and his companion, Anne Swann Bennett. A visitation will began at 1 p.m. with a memorial service following at 2 p.m. on Saturday, Feb. 28, 2015, in Sapona Road Church of God, 1315 Sapona Road, Fayetteville. Willie loved flowers, but most of all, he loved fishing. Memorial donations in his honor may be made to the American Diabetes Association.

The family of Willie Edward Ellis created this Life Tributes page to make it easy to share your memories.

Send flowers to the Ellis family.