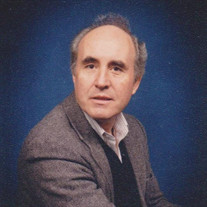 Vincent Thomas Puleo died on July 17, 2017 at First Health Hospice and Palliative Care in Moore County. Dr. Puleo was born March 10, 1934 in St. Albans, New York to Joseph and Rose DiGiovanna Puleo. He attended public schools in Queens, NY, was a Korean War veteran and graduated from Hofstra University with a Bachelors Degree in Psychology in 1959 and a Masters Degree in Clinical and School Psychology in 1961. Subsequent study at Yeshiva University, Bronx, NY led to a Doctorate in Education and School Psychology in 1970. Dr. Puleo's career spanned 35 years, mainly in the Mid-Hudson region of New York State. he was a school psychologist, psychologist in private practice, Director of Educational Research and Evaluation, consultant to various public and private agencies, and a college teacher at SUNY New Paltz. He was also a trustee on community boards servicing mental health and the intellectually challenged. His professional activities focused on the developmental years ranging from preschool to young adulthood. He retired in 1996. Dr. and Mrs. Puleo moved to Fayetteville, North Carolina in 1989 and then relocated to Pinehurst in 1992. Dr. Puleo was a member of Sacred Heart Church for many years where he served at a Lector and Eucharistic Minister. He was a member of the Pinehurst Country Club for many years and enjoyed tennis, bridge, softball, pickle ball, gardening, swimming, and bicycling. In later years he became involved in tri-athletics and was a member of the Pinehurst Sandspurs. Dr. Puleo volunteered for First Health Hospice and the Moore County Department of Aging for a number of years. He is survived by his loving wife, Gail Burchard Puleo of Southern Pines, four daughters-Ruth Peterkin of Tallahassee, FL, Deirdre Puleo of Modena, NY, Jennifer Johnson of Hebron, CT, and Kristen Souto of New Paltz, NY and two step-children - Mari McAvoy of Catskill, NY and Jon Goffredi of Fayetteville, NC as well as three grandchildren and two step-grandchildren. His sister, Rita Hoch of Sussex, New Jersery survives. A memorial service will be held on Monday, August 7, 2017 at 4:00 pm at the Penick Village Chapel. Memorials may be made to First Health Hospice and Palliative Care or Penick Village Endowment Fund.

The family of Vincent Thomas Puleo created this Life Tributes page to make it easy to share your memories.

Send flowers to the Puleo family.