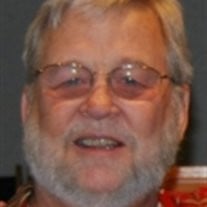 REV. TIMOTHY J. FLINT Reverend Timothy (Tim) Flint, 63, of Wilmington, NC went to be with his Lord and Savior, Jesus Christ, on May 29, 2013, at the Lower Cape Fear Hospice Center. He was born on June 24, 1949 in Washington, DC, the eldest son of Thomas M. and Helen F. Flint. Tim graduated from Richard Montgomery High School in Rockville, Maryland, and joined the U.S. Navy shortly thereafter, where he achieved the rank of Petty Officer 3rd Class Boatswain's Mate (3 times due to his Irish temper!) After discharge from the Navy he went to work at his father's auto parts store in Rockville. Tim turned his life over to Jesus in 1978 and married the love of his life Mary Louise Hough. They moved to Damascus, Maryland and began their spiritual journey at Upper Seneca Baptist Church. In 1982, Tim answered God's call to the Gospel Ministry and entered Washington Bible College. While attending school at night he owned and operated Olney Auto Parts until closing it in 1985. He remained in the auto parts business managing a store for ARO Automotive as he continued to prepare for the ministry. After receiving his Associates Degree in Biblical Studies he was ordained and called as Associate Minister to Adults at Upper Seneca. After Mary's retirement from the National Institutes of Health, they relocated to Wilmington, NC, to be close to Mary's aging parents and the many beautiful NC golf courses (Tim was an avid "duffer" until his health precluded playing). Over the years, Rev. Flint pastored the following churches in North Carolina: Watha Baptist in Watha; Silver Lake Baptist in Wilmington; Lakeview Baptist in Linwood; and then back to Wilmington as pastor of Gibson Avenue Baptist from which he retired in 2005 due to health problems. Following retirement from full-time pastorate, Rev. Flint served for a brief period as Pastoral Assistant to Pastor Danny Hawkins at Wrightsville Beach Baptist Church. His love for the Lord Jesus and his compassion for the lost sent him on mission trips to Brazil, Durban South Africa, and Zimbabwe during the course of his ministry. He continued to serve the Lord by teaching Bible Classes at Wrightsboro Baptist Church until weeks before his death. Rev. Flint was preceded in death by his parents and his sister Lorraine Flint Rother. He is survived by his loving wife of 40 years, his stepson Jack Hogan, III; Uncle John Loudon (Kathy)- who he considered his elder brother-and brother Steve (Ellie) both of Maryland; brother Thomas (Judy) of Alabama and estranged brother Danny; 14 nieces and nephews; 13 grand nieces and nephews; and other aunts, uncles and cousins. Tim will be missed by his adopted family and traveling companions Clarence and Lib Callihan; and Shaun, Melissa, and Brandon Callihan who claimed Tim and Mary as surrogate parents and grandparents. A Celebration of Tim's life will be held on Thursday, June 6 at 4:00 P.M at Wrightsboro Baptist Church, 2736 Castle Hayne Rd. Officiating will be Reverends Brad Harrison and Rick Armstrong. Special gratitude goes to the many doctors who cared for Tim during his 16-year battle with prostate cancer and heart disease, especially his Family Doctor, Michael Caveness. Tim was fond of saying he had all his "Gists" on speed dial: UroloGIST, Dr. R. Van Nichols; CardioloGISTs, Drs. Murphy, Weaver, and Ellis; OncoloGIST, Dr. Kotz; Radiation OncoloGISTs, Drs. Neal and Papagikos, as well as the support staff at all of these practices. Tim spent his final week at the Lower Cape Fear Hospice Center whose staff helped ease his pain during his travel from here to eternity. In lieu of flowers, donations may be made in Tim's name to Lower Cape Fear Hospice, 1414 Physicians Drive, Wilmington, NC 28401; or Wrightsboro Baptist Church Building Fund, 2736 Castle Hayne Rd., Wilmington, NC 28401.

REV. TIMOTHY J. FLINT Reverend Timothy (Tim) Flint, 63, of Wilmington, NC went to be with his Lord and Savior, Jesus Christ, on May 29, 2013, at the Lower Cape Fear Hospice Center. He was born on June 24, 1949 in Washington, DC, the eldest son... View Obituary & Service Information

The family of Timothy Joseph Flint created this Life Tributes page to make it easy to share your memories.

Send flowers to the Flint family.