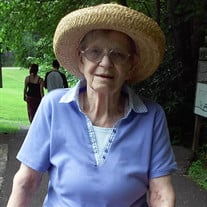 Rosemary Roby Lancaster, 89, of Burlington, North Carolina, died peacefully, surrounded by her children, on Wednesday, August 5, 2015. She was born on June 12, 1926, in Cleveland, Ohio, the daughter of Lester L. Roby and Mabel Mae Grose Roby. She was the second of three siblings. Her brothers were Lester L. Roby, Jr. and Wade Grose Roby. She met her future husband, John Herrold Lancaster, Jr., while attending grade school in their hometown of Tiffin, Ohio. Their childhood friendship evolved through war correspondence and family visits during their college years. Their wedding took place on her birthday, June 12, 1948, in Tiffin. Just the week before, she graduated from Ohio Wesleyan University, with a B.A. in psychology/art. She was a homemaker and enjoyed being with her young children. Later, she continued her education and received a degree in “Early Childhood Development,” and then taught at an experimental “Lab School” at Brevard Community College, Florida. She grew up in Tiffin, Ohio and resided there with her family, until moving to Brevard County, Florida in 1964. After her husband’s death, she moved to Twin Lakes Retirement Community in Burlington, North Carolina. A lover of the outdoors/nature, she delighted in annual family camping vacations. A lifelong birder, she enjoyed the diverse birds of Florida, became an active member of the Audubon Society and The Birding Club of Greensboro, NC. Rosemary took pleasure in playing cards and board games. She shared this passion with her children, grandchildren and great-grandchildren. An accomplished card player and member of several bridge clubs, bridge-playing friends vied for her partnership. A lifelong avid reader, she also developed a writing talent. As a young mother, she had several articles on family life published in various magazines. In her later years, she returned to writing and published memoirs. She was an active member of the Alamance County (NC) Writers Club. While living in Ohio and Florida, she was a member of the United Methodist Church. She later became a member of The Unitarian Universalist Church of Greensboro, NC. She volunteered in the Stephens Ministry in both Florida and North Carolina. Well known as an organizer/planner extraordinaire, her family lovingly referred to her as the “Camp Director.” In her seventies, she hiked/conquered Mount Le Conte in the Great Smokey Mountains, with her good friend Pat. She is survived by her brother, Wade Grose Roby (Janet) of Tiffin, Ohio; her children, John Herrold “Trip” Lancaster III of Albuquerque, New Mexico; Claudia Lowe (Wendell) of Kingsport, Tennessee; Joseph Wade Lancaster (Sally Lane) of Lewisburg, West Virginia; Wendy Marshall Lancaster of Takoma Park, Maryland and Heidi Lancaster Foutz (Brian) of Chester, Virginia; nine grandchildren, thirteen great-grandchildren and several nieces and nephews. She was preceded in death by her loving husband John Herrold Lancaster, Jr., her parents, her brother Lester L. Roby, Jr. and his wife Shirley Roby. A Celebration of Life Service will be held on Saturday, August 15th at 2:00 p.m. in the May-Foley Chapel at Twin Lakes Retirement Community, followed by a reception, carefully planned by the “Camp Director.” Rosemary requested memorial gifts be given to the National Parks Conservation Association, 777 6th Street, N.W., Suite 700, Washington, DC 20036.

The family of Rosemary Lancaster created this Life Tributes page to make it easy to share your memories.

Send flowers to the Lancaster family.