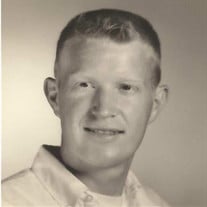 Roger N. Oakley, age 81, passed away on July 28, 2018. Roger was born July 17, 1937 to parents, George and Cleta Oakley. He and his 10 siblings grew up in the White Oak section of Greensboro, N.C. Roger graduated from Rankin High School and joined the U.S. Air Force, where he served four years and was honorably discharged in 1959 as an Airman 1st class. He returned to Greensboro where he met his wife, Brenda, and raised his two children, Reid and Pamela in Julian, N.C. Roger worked in the textiles industry as a colorist and later as plant manager. Roger loved his family, nature and all God’s creatures. He would adopt animals in need and often had a menagerie of dogs, cats, horses, chickens, ducks, goats and occasionally raccoons, possums and other wild things. His favorite past times included quiet walks through the woods and along the creek alone or with his children and especially his grandchildren; or, sitting in the gazebo listening to Willie Nelson or Emmy Lou Harris and looking out over his animals and gardens. He loved sharing his home with family and friends and the annual Halloween parties were notable events for his extended family and friends for many years. Roger is survived by his wife of 58 years, Brenda; son, Reid, and wife, Brande; daughter, Pamela Oakley-Lisk, and husband, Tim Lisk; grandchildren Jaime Lisk Weatherly, Jeri Oakley and Tanner Lisk; great-grandchild, Ivy Nance; sisters, Nancy Palmer, Mazie Mahaffey (Chester) and Laura Cheek; brothers, Danny (Cynthia), Delano “Smick” (Sandy) and Don (Jill); sister-in-law Anna; and many nieces and nephews. He is preceded in death by his parents, George and Cleta, brothers Ernest (Anna), Julius “Duke”, John “Jolly” and Randy. A memorial service will be held on Aug. 24, at Gate City Vineyard Church, located at 204 South Westgate Drive, Greensboro, N.C. at 3 p.m. Roger’s ashes will be returned to the earth at a future date in a private ceremony. In lieu of flowers, please consider a donation to Hospice or a local animal rescue.

Roger N. Oakley, age 81, passed away on July 28, 2018. Roger was born July 17, 1937 to parents, George and Cleta Oakley. He and his 10 siblings grew up in the White Oak section of Greensboro, N.C. Roger graduated from Rankin High School and... View Obituary & Service Information

The family of Roger Nease Oakley created this Life Tributes page to make it easy to share your memories.

Send flowers to the Oakley family.