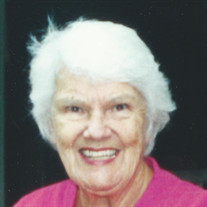 Priscilla Perry "Patt" Sprunt returned to the Lord on Wednesday, September 12th in Boone, NC surrounded by her family. Born May 31, 1925, in Springfield, MA to Ernestine and Leon Perry, Patt and her older sister Jayne were best friends and later enjoyed birding trips together all over the country. She married Dr. William Hutchinson Sprunt in 1945 and seven years later they moved with their three children to Chapel Hill, NC where Dr. Sprunt taught at the UNC Medical School. After the family moved to Raleigh in 1961, Dr. Sprunt established Wake Radiology with two other doctors while Patt raised their children and pursued her passions. Besides sailing her Sunfish, Patt loved throwing parties to entertain her friends and keeping up with the latest fashions. Her outstanding accomplishments include earning a B.A. in Anthropology from NC State University at age 50, after which she researched the Maori culture in New Zealand and interviewed Gullah descendants living on Johns Island, SC. Her appreciation of art led her to become a docent at the NC Museum of Art while simultaneously teaching dance to visually-impaired students at the Governor Morehead School for the Blind. In 1961, she combined these interests by helping to establish the world's first art gallery for the visually-impaired, the Mary Duke Biddle Art Gallery for the Blind. She faithfully volunteered for 20 years at the NC Museum of Natural History, ten years at Wake County Hospice, and spent many years tending to the botanical gardens in Method, NC. In 1964, after discovering the artwork of Andrew Wyeth, Patt was sanctioned by the Wyeth family to lecture on the works of N.C., Andrew, and Jamie which included presentations in England and Japan. Patt is preceded in death by her parents, her sister, and her husband. She is survived by her children Suze Peace, Hutch Sprunt, and Mala Landt; seven grandchildren; and nine great-grandchildren scattered throughout the world. In lieu of flowers, please consider a donation to your favorite charity in Patt's honor.

Priscilla Perry "Patt" Sprunt returned to the Lord on Wednesday, September 12th in Boone, NC surrounded by her family. Born May 31, 1925, in Springfield, MA to Ernestine and Leon Perry, Patt and her older sister Jayne were best friends and later... View Obituary & Service Information

The family of Priscilla Perry "Patt" Sprunt created this Life Tributes page to make it easy to share your memories.

Priscilla Perry &quot;Patt&quot; Sprunt returned to the Lord on Wednesday,...

Send flowers to the Sprunt family.