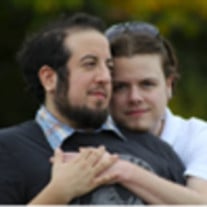 Obituary for Nykolas Lee Danger (1980-2014) Raleigh Nykolas Lee Danger passed away January 2nd at his home in Raleigh along with his husband, Mateo Parra. Longtime friends and a loving and inseparable couple for seven years, Nyk and Mateo married at Lake Johnson in Raleigh in 2009. Their lives centered on their home, their dogs, Chauncey and T-Bone, cooking and their extended family. They were an inspiration and role model for many, many family and friends who admired their courage and ability to live with truth and humor amidst the many challenges life threw their way. Nyk graduated as valedictorian in 1999 from Brehm Preparatory School. After four years in San Francisco he resettled in Raleigh in 2003. He loved Mateo, his family, his animals, and his reptiles. As a child he spent many hours with tadpoles and turtles in the creek of his childhood home on Dixie Trail. He explored sea creatures on the coast and treasured his own horse, Penny. As a teen, Nyk traveled in the US, as well as to Germany, Canada, Jamaica and Belize. At SOAR summer camp, he learned mountain hiking, scuba diving, and rock climbing. He loved the Recompense Retreat Center in Chatham County but perhaps most dear to his heart was his grandparents Lake Junaluska, NC, cabin. Nyk was an active volunteer with Reptile Rescue of the Carolinas and had seven non-venomous snakes all with names beginning with the letter H. A great help in the family garden, he loved harvesting and donating vegetables for the Plant A Row/Inter Faith Food Shuttle. His employment included Borders Bookstore, ArtsSpace, the Village Deli, and most recently WebAssign. Mateo (1976-2014) was a gifted writer, working with poetry, ’zines and other creative writing. He grew up in the Miami area, where he received his Associates in Arts Degree from Miami Dade Community College. Employed as a bilingual specialist for the past four years at Safe Streets, Garner, NC, he had worked at Starbucks, Choices: Memphis Center for Reproductive Health, and AMC movie theatres among other places. After leaving Miami, he lived in Memphis and North Mississippi before settling in the Triangle. Mateo was a wonderful cook who especially enjoyed making Cuban American and vegan dishes as well as exploring the delicacies of food truck rodeos. One of his greatest weekly adventures was to get $50 of groceries for $1 or less through couponing. Nyk is survived by his parents, Georgia M. Springer and William R. Finger, his sister Dana C. Yeaman, and many close and loving cousins, aunts, uncles and friends. Mateo is survived by his mother and extended family in Miami and many friends. A Service of Remembrance for Nykolas and Mateo will be held at 11:30 am, Saturday, January 18th, with reception following, at the Unitarian Universalist Fellowship of Raleigh, 3313 Wade Avenue, Raleigh. In lieu of flowers, the family requests that donations be made to: Reptile Rescue of the Carolinas, www.reptilerescuecarolinas.org/help; Inter Faith Food Shuttle, https://secure3.4agoodcause.com/food-shuttle/gift.aspx?id=2; or PFLAG Triangle, www.pflagtriangle.org

Obituary for Nykolas Lee Danger (1980-2014) Raleigh Nykolas Lee Danger passed away January 2nd at his home in Raleigh along with his husband, Mateo Parra. Longtime friends and a loving and inseparable couple for seven years, Nyk and Mateo... View Obituary & Service Information

The family of Nykolas Lee Danger created this Life Tributes page to make it easy to share your memories.

Send flowers to the Danger family.