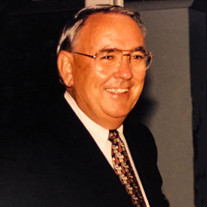 Michael John (Mike) Rooney, 81, passed away peacefully at First Health Hospice House in Pinehurst on June 20, 2020. Mike is survived by his wife of 60 years (Mary) Charlotte (Bingham) Rooney; his daughters, Michelle Guenther (Eric) of Houston, TX, Patricia Knowlton of Charlottesville, VA; his son Kevin Rooney (Stacy) of Raleigh, NC; his sisters Mary O’Rourke (Jimmy) of Islip, NY, and Kathleen Zito (Tommy) of Saratoga, NY; his brother Martin Rooney of Columbia, SC; as well as his six grandchildren: McKean Knowlton, Michael Rooney, Jack Rooney, Grant Guenther, Caitlin Guenther Tripp (Jeremy) and Michael Guenther, and a loving extended family of nieces and nephews and their children. Mike is a graduate of the University of Rhode Island with both a BS in Chemistry and a Master’s in Business Administration. After graduating, Mike and Charlotte married in Rhode Island where they remained while Mike worked as a chemist for Owens Corning Fiberglass. After several years in Rhode Island, a career change brought Mike and his young family to the New York City area as he began working in sales and marketing for Dow Badische, a German subsidiary of Dow Chemical. Other promotions with Dow Badische took the family to Williamsburg, VA (twice) and Chattanooga, TN. Mike’s final move was to JP Stevens in Aberdeen, NC where he served as Vice President of Marketing before he led a buy-out of the company and renamed it Gulistan Carpet. He served as Gulistan’s President and CEO until his retirement in 2000, at which point he could relax and play golf with his friends at the Country Club of NC. He especially enjoyed spending time with his family and hearing of their accomplishments and life events. His playful spirit, sense of humor, and love for his family will be sorely missed. Our family would like to thank the staff at the Caritas Unit at St. Joseph of the Pines, Belle Meade, and First Health Hospice House for making his time at each location comfortable and peaceful. A celebration of his life will be planned once Covid-19 restrictions are lifted. In lieu of flowers please remember First Health Hospice House in Pinehurst, NC 251 Campground Road, West End, NC 27376 or your favorite charity.

The family of Michael John (Mike) Rooney created this Life Tributes page to make it easy to share your memories.

Send flowers to the Rooney family.