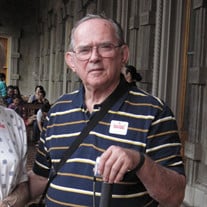 Lenox Hensdale Bramble Jr., 83, of Fayetteville, passed away Friday, July 17, 2015. A memorial service will be held at First Presbyterian Church at 11 a.m. today, Friday, July 24 2015. A visitation will be held prior to the service church in parlor. After the service, the family will have lunch in the church fellowship hall. He is survived by his loving wife, Katherine Bramble of more than 60 years of marriage. They have four children: Daughters, Diane Bramble-Fanning (late Gary Fanning) and Katherine Hodge (William Hodge), both of Fayetteville; sons, Lenox Edward Bramble (Monica Bramble) Venice, Fla., and James Gee Bramble (Valencia Watson-Bramble) Honolulu, Hawaii. He has two grandchildren, Lauren Star Hodge and Matthew Lenox Hodge; as well as nieces and nephews. Lenox retired from Kelly Springfield Tire Co. after more than 35 years. He enjoyed fishing with his cousin and was an avid Wolfpack supporter. He volunteered at Aversboro Museum and would discuss U.S. history with anyone. He commissioned several prints of the Civil War and was a vendor at many craft fairs in the area. He served as a deacon and sang in the Chancel Choir at First Presbyterian Church and also participated as a Sunday School teacher. Lenox and Katherine traveled to Egypt, Greece, Israel, England, Scotland, Alaska and their last trip being Hawaii. They also enjoyed camping at Myrtle Beach, S.C., in their camper. He enjoyed listening to music and watching westerns. His family is left with many fond memories of trips to the beach, Christmas and vacations. In lieu of flowers, donations may be made to: First Presbyterian Church, Attn: Building Fund, P.O. Box 569, Fayetteville, NC 28302; or Averasboro Battlefield Commission Inc., P.O. Box 1811, Dunn, NC 28335. Arrangements by Cape Fear Crematory of Stedman.

Lenox Hensdale Bramble Jr., 83, of Fayetteville, passed away Friday, July 17, 2015. A memorial service will be held at First Presbyterian Church at 11 a.m. today, Friday, July 24 2015. A visitation will be held prior to the service church... View Obituary & Service Information

The family of Lenox Hensdale Bramble Jr. created this Life Tributes page to make it easy to share your memories.

Send flowers to the Bramble family.