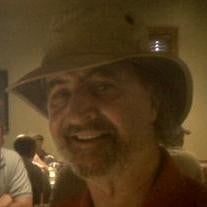 Dr. Kriss Demendoza, 63, of Fayetteville, died Thursday, January 17, 2013 at Cape Fear Valley Medical Center. He was born February 23, 1949 in Bruxeilles (Brussels), Belgium. Kriss was the son of the late Antonio and Magdalena Demendoza. At age 9, Kriss left home for an internship at a Catholic Seminary. He later graduated from the Pontifical Javeriana University with degrees in Spanish, Communications, Education, and a Ph.D. in Sociology. He came to the United States to teach at Brown University in Providence, RI. Later he moved to Pawley’s Island, SC and completed a degree in Diamonds, Jewelry Making, and Repair from the Gemological Institute of America and he opened several jewelry stores and gift shops in the Myrtle Beach Area. Kriss was an avid collector of shells. In 1982, his seashell collection was the 10th largest in the USA. The Discovery Place and the Department of Marine Biology at the University of SC have displayed parts of his collection. He also wrote many seashell articles for the Oceanic Society. His gold- trimmed seashell jewelry line was launched and today sells globally. Until his death, he designed for Kriss Nature’s Jewelry. Kriss served as the Coordinator for the Catholic Social Ministries, Catholic Charities today. He taught Spanish, Humanities, and Sociology at Fayetteville State University, Fayetteville Technical Community College, and UNC Pembroke. He also served as the chairman of the Homeless Coalition in Fayetteville. He became well known for the Spy Shoppe and was often referred to as the local James Bond. At one time he worked with The Fayetteville Observer. A Celebration of Life Service will be held at the First Baptist Church, 201 Anderson Street, at 4:00 PM Monday, January 21, 2013 with visitation prior to the service at 3:00 PM. Kriss is survived by his wife, Belva Hawley Demendoza; a son, Adam Whitaker (Brittni) and a daughter, Meagan Whitaker (David Wilson) of Dunn; a sister, Teresita de Vega of Colombia; two brothers, Ricardo (Patricia) of Orlando, FL and Antonio (Maria Elena) of London, England, nieces and nephews, and Passey, his miniature schnauzer was his home nurse. He was a devoted husband, father, and grandfather and much loved by his family and friends. We will all miss his unique personality and his beautiful accent. Memorials may be made to First Baptist Church, New Century Fund, 201 Anderson Street, Fayetteville, NC 28301 or Catholic Charities, 715 Nazareth Street, Raleigh, NC 27606.

The family of Dr. Kriss R. Demendoza created this Life Tributes page to make it easy to share your memories.

Send flowers to the Demendoza family.