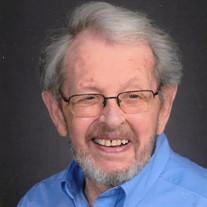 John Durward Ashford, 88, beloved husband, father, grandfather, and friend, died May 10, due to an extended illness at Cape Fear Valley Hospital. John was born September 19, 1931, in Tarboro, NC to John Durward Ashford, Sr., and Virginia Mitchell Ashford. After growing up in Scotland Neck and graduating from high school there in 1949, he attended the Feree School of Art in Raleigh for two years. Following art school, he served four years in the US Air Force. He graduated from U.N.C Chapel Hill in 1958 with a degree in journalism. John came to Fayetteville to work briefly for Lloyd Advertising Co., and then for the Fayetteville Observer in the advertising department. In 1963, he opened his own advertising and public relations agency, Ashford and Company. He enjoyed this work and the many friendships he made during this time. He retired in 1995. John was very involved in community affairs. He served on the boards of the Fayetteville Area Industrial Development Corporation, Habitat for Humanity, the Salvation Army, Fayetteville Urban Ministry, and the Arts Council. He was a long-time member of the Fayetteville Kiwanis Club. In addition, he was active in peace and justice concerns, including the Nuclear Freeze Campaign, Fayetteville Peace with Justice, and People of Faith against the Death Penalty. John’s religion was very important to him. He was an active member of Holy Trinity Episcopal Church, followed by a period of membership at St. Paul’s in the Pines Episcopal Church. At the time of his death he had returned to Holy Trinity. He served several terms on the vestry, taught Sunday School, and edited the diocesan newsletter for a time. John loved spending time with his family; whether fishing with Mike, watching basketball with Nick, picking blueberries at Sally’s, or traveling with Ann. He enjoyed many weekends relaxing with family and friends at the “Beach Nuts” on Holden Beach. He was especially proud of his grandchildren, Hadley and Clay. Listening to Clay play “Amazing Grace” on the bagpipes was a special gift during his illness. John’s hobbies included pottery and painting. He leaves many pots and vases of all shapes and sizes, as well as several nice sculptures. John loved music and enjoyed attending concerts, as well as humming along with the church choir. He was an avid reader and especially enjoyed a good mystery. Tuesday Night Pizza with his tennis and poker buddies, was a long-standing tradition that he seldom missed. John is preceded in death by his son, Michael Rhodes Ashford. Left to cherish his memory are his wife of sixty years, Ann, his children, John Nicholson Ashford (Nick) and wife Laura Ashford; Sarah Ashford Guill (Sally) and husband Rodney Guill; grandchildren Hadley Evelyn Ashford and Clay Briggs Ashford; brothers Samuel Briggs Ashford and wife Janet and David Lawrence Ashford and wife Mary. A family memorial service will be held at Holy Trinity Episcopal Church. In lieu of flowers, donations may be made to Holy Trinity Episcopal Church or Second Harvest Food Bank. Arrangements by Cape Fear Crematory.

The family of John Durward Ashford created this Life Tributes page to make it easy to share your memories.

Send flowers to the Ashford family.