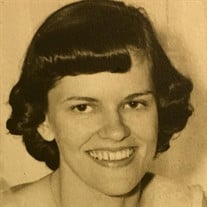 Joan Franklin, 84, of Lumber Bridge went to be with the Lord Wednesday, June 14, 2017. Born March 30, 1933, in Baltimore, MD, she was the daughter of the late William and Frances (Kryszkowska) Rybka. She was also preceded in death by her brother, William Michael Rybka. Survived by her husband of 63 years, Frank Theodore Franklin, whom she married April 25, 1954; daughters, Janine Anne Lightner and husband Charles, Pamela Jane Gay and husband Jared; grandchildren, Stephen Battise and wife Dawn, Matthew Battise, and Thomas Satterly; brother Theodore Rybka and wife, Katherine, of Frostburg, MD and sister, Dorothy Coppolino of Baltimore, MD; and many special nieces, nephews and friends. Upon graduating from high school, Joan began a career as a stenographer with the Mathieson Chemical Company in Baltimore. She was expert in shorthand and enjoyed, until late in her life, signing her greeting cards in that manner, to the confusion of all recipients. She met and married the love of her life at a teen dance at St. Elizabeth’s School and they were married three years later. Joan was a skilled, meticulous homemaker and she followed in her mother’s footsteps by accurately recording household expenditures. She became so well versed in finances that she was able to instruct an IRS agent in how to complete tax returns regarding investments. In her early years, Joan was an accomplished dress maker and she enjoyed cooking, baking, dancing, and card playing throughout her life. She appreciated holidays and made special occasions reflective of her Polish heritage, providing those cultural traditions to her family especially at Easter and Christmas. Throughout her life, Joan had the opportunity to live in a variety of states and she made a warm and comfortable home in each of them. Joan loved being surrounded by family and friends and repeatedly performed the duties of hostess with grace and ability; her compassion and tolerance for others was well known. She was immensely proud of her two daughters and all that they have been able to accomplish in their lives, she loved them dearly. Her grandchildren meant the world to her. She was a devout Catholic and faithfully attended Mass. She will be sadly missed but we will be comforted to know she is with her beloved Jesus. A Catholic Funeral Rite Mass will be conducted at Saint Patrick Catholic Church in Fayetteville, NC, on Thursday June 22nd at 11am. Family will receive guests at 10:00am. A graveside Rite of Committal will be held at Gardens of Faith Memorial Gardens Cemetery, Baltimore Maryland on Friday, June 23rd at 11am. Special thanks to the many staff members of First Health Hospice House who assisted with Joan’s care during her last days. Memorials in Joan’s name may be sent to First Health Hospice House, Pinehurst NC.

Joan Franklin, 84, of Lumber Bridge went to be with the Lord Wednesday, June 14, 2017. Born March 30, 1933, in Baltimore, MD, she was the daughter of the late William and Frances (Kryszkowska) Rybka. She was also preceded in death by her brother,... View Obituary & Service Information

The family of Joan Franklin created this Life Tributes page to make it easy to share your memories.

Joan Franklin, 84, of Lumber Bridge went to be with the Lord...

Send flowers to the Franklin family.