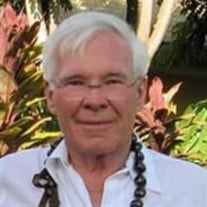 James “Jim” Edward Kennedy, was born July 21, 1940 and passed from this life on February 4, 2021. He is survived by his wife of 20 years Margaret, his stepchildren Jennifer Treloar, Jason Treloar (Penny), Justin Treloar (Shandi) and three grandchildren Jason Treloar, Jr., Hannah Drawbridge and Shannon Treloar. He was preceded in death by his parents, brother Johnny and daughter Elizabeth. Also mourning his loss are his stepsister Lil, and halfsiblings JoAnn and Walt. Jim lived an honorable and adventurous life. He served 20 proud years in the U.S. Army Special Forces serving two tours in Vietnam and other various international assignments before retiring in 1979. He was fluent in three languages and often served as an interpreter. After retiring from the Army, he worked as an analyst, served two years as a Special Officer with the United States Secret Service and worked for the U.S. Census in 2000 and 2010. He was a founding member of the Special Operations Association (SOA) which he was actively involved in. Jim traveled all around the world. He loved dogs, reading, cooking and most of all loved his beautiful wife Margaret Kennedy. When Margaret volunteered with various organizations, he always offered his services and support. In lieu of flowers please consider making a donation to the Second Harvest Foodbank in Fayetteville, NC https://hungercantwait.org/ A mass to celebrate his life will be held on Friday, February 12th at 12:15 pm at Saint Ann Catholic Church, 357 N Cool Spring St, Fayetteville, NC 28301. The mass will also be live-streamed from the Saint Ann Catholic Church's website found here https://www.stanncatholicchurch.org/ or their Facebook page found here https://www.facebook.com/stannfayettevillenorthcarolina

The family of James "Jim" Edward Kennedy created this Life Tributes page to make it easy to share your memories.

Send flowers to the Kennedy family.