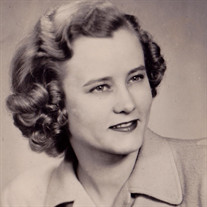 Hilda Gae Renegar Moffitt, 94, died peacefully on February 20th at the Carolina Meadows Health Center. Daughter of Vassie Lennis and Eula Mae Reavis Renegar, she was born in Yadkin County, NC. A 1942 graduate of Women’s College (now UNC-Greensboro) with a BS in Home Economics, she began her career as Clinical Dietitian at Garfield Hospital in Washington, DC, then Baptist Hospital in Winston-Salem, NC. There she met and married Clark Fischer in 1944. After his death in 1946, she and her sister, also a widow, moved to NYC where they worked at Mt. Sinai Hospital. In late December, she met John William ‘Bill” Moffitt, who became her soulmate for life. They married June 13, 1947, and made their home in Chapel Hill. She served as University Dietitian for UNC, Director of the Chapel Hill School Lunch Program, and Outpatient Dietitian for UNC Hospital, retiring in 1982. Hilda and Bill’s home became a center of hospitality for family, friends, work associates, and international students. Children of their friends who attended UNC found a second home at the Moffitt’s. Hilda loved nature and gardening, creating beautiful spaces in her yard. As a founding member of the Olin T. Binkley Memorial Church in 1958, she actively participated in the congregation. She left a legacy of stewardship and beauty for the landscape, as well as the interior plants and flowers. She and Bill traveled extensively, both internationally and through all fifty states, 48 of them in Hilda’s signature orange Econoline van. They were also known for their love of dancing, which they continued after moving to Carolina Meadows in 2005 until she suffered a stroke in 2010. She was a member of Mt. Carmel Baptist Church. In addition to her beloved and devoted husband of 68 years, she is survived by her children, Matthew Alan Ripley-Moffitt (Carol) of Chapel Hill, and Melissa Ann Moffitt Fulmer of Little River, SC.; 4 grandchildren, Anna Ripley-Moffitt, Rachel Ripley-Moffitt Gorman (Sean), JJ Fulmer, and Crystal Fulmer; 3 great grandchildren, Bentlee Henderson, Brilee Henderson, and Harlow Gorman; sister Margaret “Bink” Craig of Atlanta, GA, and nine nieces and nephews. A memorial service will be held at the Olin T. Binkley Memorial Baptist Church on Sunday, March 6th, at 3:00pm. Memorial gifts may be made to the NC Children’s Home Society of NC, PO Box 14608, Greensboro, NC 27415, www.chsnc.org, or Binkley Baptist Church Landscaping Fund, 1712 Willow Dr., Chapel Hill, NC 27514, www.binkleychurch.org.

The family of Hilda Gae Renegar Moffitt created this Life Tributes page to make it easy to share your memories.