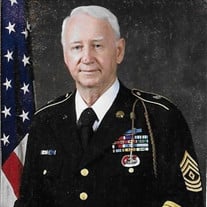 Fayetteville - On November 21, 2017, 1SGT (Ret) Frank Foster departed to his final duty station. He leaves behind his best friend and loving wife of 58 1/2 years, Undine; two sons, Frank and Gerald (Christine) Foster; his oldest sister, Lena Jane Chitty, and numerous grandchildren and great-grandchildren. Dad joined the US Army at 16 (he snuck in) and served in Korea, Lebanon, Japan, Germany, and Vietnam. Before retiring after 24 1/2 years of service, Frank earned numerous medals, commendations and awards; to include 2 purple hearts. He was the Soldier's Soldier. Born lucky # 7 out of 10 children to Gerald and Bertie Foster of Winston-Salem, NC, Dad had no middle name. He always joked that he was born on wash day and Big Mom didn't have time. When dad retired from the army, he became a truck driver, but he never left the Army. O.D. Green was in his blood. With tears in his eyes, he watched the Pentagon burning on 9/11 and said "I need to get back in the Army." He was 69 then. Duty, honor, and country were more than words to him. They were his personal guidebook. Those that knew him best would say: "AIRBORNE, ALL THE WAY." Dad was preceded in his passing by his parents, brothers, sisters, and his youngest son, Cliff Douglas Foster. The family would like to express their sincere gratitude to the members of Cape Fear Hospice, whose dedication and effort to provide quality care over the final days were a heartwarming blessing to the family. We give thanks, praise and glory to God for the gift of his life, love, discipline, direction, and the blessing of the time we spent with him. There will be a graveside service at Sandhills State Veterans Cemetery, 8220 Bragg Blvd, Ft. Bragg, NC, on Monday, December 4, 2017 at 2:00 pm. I give you one final salute 1SGT A/A Frank Foster jumping off. AIRBORNE ALL THE WAY

The family of Frank Foster created this Life Tributes page to make it easy to share your memories.

Send flowers to the Foster family.