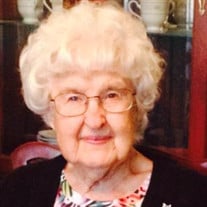 Frances Dettmar Hayes, 91, formerly of Greensboro, NC, died on December 28, 2014, at The Alamance-Caswell Hospice House in Burlington, NC. She was born April 9, 1923 in Kings Mountain, NC to the late Laney Christopher and Annis Love Dettmar. After graduation from Kings Mountain High School and Brevard Junior College she joined the Army’s Cadet Nurses Corp and received her B.S.R.N. in 1946 from Duke University. Her professional career included work as Supervisor of OB-Gyn and Surgery at Duke Hospital; Surgical Nurse at Sarasota Memorial Hospital in Sarasota, Florida; then Public Health Nursing in Florida. Her last 25 years working were spent at Guilford County Health Department where she retired in 1986 as Supervisor of Adult Health Services. An active member of Our Father Lutheran Church on Groometown Road, she was one of the first women to serve on the church council. She chaired many committees and especially enjoyed leading the Sunshine Club which she chaired for 20 years. Fran was always an active volunteer for the American Lung Association of NC and served as State President in 1984-85. She was the state chairman for the Smoke-Free 2000 program to encourage children to not smoke. She also enjoyed volunteering with the Piedmont Triad International Airport for more than 20 years beginning in 1989. Fran loved to travel and was fortunate to be able to see much of the USA and several foreign countries. Fran was married to Donald L. Hayes of High Point, NC in Sept. 1948. She was predeceased by her parents and a brother, Robert Brent Dettmar, of Gulf Coast, Florida. A memorial service will be held at 2:00 pm, Sunday, January 11th at The Lutheran Church of Our Father, 3304 Groometown Road, Greensboro, NC, 27407 with the Rev. Judy Copeland, officiating. The family will receive friends at the church immediately following the service. Fran is survived by her children: son, Richard Brent Hayes (Lisa) of Hanover, MD; two daughters, Randall H Dunn of Burlington, NC and Dr. Robin H Moser (Bob) of Concord, NC; six grandchildren, Mary Catherine Dolphens (Ben) of Charlotte, NC, David A Dunn (Laura) of San Diego, Ca., Ethan D Hayes of Morgantown, W. Va. , Katie E Moser of Alaska, Molly C Moser of Chapel Hill, NC, and Patrick N. Moser of Chapel Hill, NC. Two sisters, Ruth Goforth of Albemarle, NC and Kitty Barton (Roger) of San Francisco, as well as one brother, William R Dettmar (Margaret) of Winter Park, Fla also survive. She was also privileged to be survived by many nieces and nephews and their families. Because of her love for all animals (except snakes), she requested no flowers but rather donations made to your choice of Animal Welfare Organizations; NC Public Television or Victory Junction Gang Camp.

The family of Frances Dettmar Hayes created this Life Tributes page to make it easy to share your memories.

Send flowers to the Hayes family.