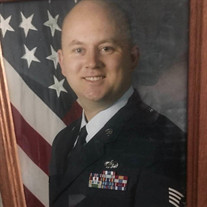 Eric Alexander Hanes, 35, passed away on July 28, 2018 in Fayetteville, NC after a three and a half year struggle with GIST cancer. He was born in October of 1982 in Los Angeles and grew up in Templeton and Paso Robles, CA. Following graduation from Templeton High School, Eric enlisted in the United States Air Force, serving as a Ground Radar Systems Technician, eventually rising to the rank of Technical Sergeant. While stationed at Minot AFB, ND, he met and married his then wife Emily Kamrowski in 2009. Eric proudly and honorably served his country with three deployments, one to Afghanistan, and while later stationed at Ramstein, Germany; he also served two deployments to Africa. Eric took great pride in being in the military and felt a strong sense of accomplishment in serving his country where he made many friends and planned to serve until retirement. Eric’s awards include Air Force Commendation Medal, Air Force Achievement Medal, Meritorious Unit Award, Air Force Outstanding Unit Award, Air Force Good Conduct Medal with two devices, National Defense Service Medal, Afghanistan Campaign Medal, Global War on Terrorism Expeditionary Medal, Air Force Longevity Service Award, and the Expert Marksmanship Ribbon. In 2013, he was awarded his Associate’s degree. After his medical discharge in 2016, Eric was able to spend much quality time making precious memories with his young daughter Audrey, who was born in 2012 during his deployment to Africa. Eric loved music and was a self-taught musician of several instruments, in particular the guitar and drums. He enjoyed listening to music, playing video games, spending time with friends, and driving his black Dodge Charger. He was an aficionado of all food and enjoyed watching action movies, especially Star Wars and the Avengers. Eric’s distinct laugh, his quick wit, and incredible sense of humor had a way of keeping everyone smiling. It is reported by those with whom he served in Africa, that even in the “crappiest situation” he had a way of making those around him feel better. Eric definitely made this world a brighter place and will be dearly missed by all who were fortunate enough to know and love him. Eric is survived by a daughter, Audrey Hanes of Holmen, WI, his parents, Philip Hanes of Templeton CA, and Renee Hanes of King City, CA, Grandma Victoria Hanes of Oceanside, CA, two sisters, Nicole Hunter of King City, CA and Andrea Hanes of Paso Robles, CA, nephews Logan Hunter and Tillman Hunter, and a niece, Tali Hunter, several aunts, uncles, cousins, a host of friends, and Eric’s devoted and loving fiance, Kristen Cottrell and her daughter Riley, who enhanced his final months and remained by his side during Eric’s final days on earth. Our beloved Eric is preceded in death by grandparents Norman G. Hanes of Oceanside, CA, Theodore A. Wyke of Atascadero, CA and Jean Morgan of Paso Robles, CA Military Service honors will be held Friday, Oct 19, 2018 at 14:00 at California Central Coast Veterans Cemetery 2900 Parker Flats Road, Seaside, CA Chaplain Robert Lokkesmoe will officiate. Reception following internment held in King City, CA given by Eric’s sisters. In lieu of flowers, the family suggests donations can be made to the GIST Cancer Research Fund, 3905 NE 167th St, N Miami Beach FL 33160 or gistinfo.org

Eric Alexander Hanes, 35, passed away on July 28, 2018 in Fayetteville, NC after a three and a half year struggle with GIST cancer. He was born in October of 1982 in Los Angeles and grew up in Templeton and Paso Robles, CA. Following graduation... View Obituary & Service Information

The family of Eric Alexander Hanes created this Life Tributes page to make it easy to share your memories.

Send flowers to the Hanes family.