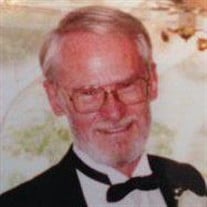 Eli Andrew "Buddy" Smith, of Eastover, 82 years of age, passed peacefully Thursday, Oct. 30, 2014, in Cape Fear Valley Medical Center surrounded by his family. Buddy was born March 10, 1932, in Maryland to Harry James and Katherine Nichols Smith. Eli met and married Maria in 1962 in Corozal, Belize. They raised their family in Fayetteville, enjoying the close bond of his brothers and sisters; Buddy retired from Civil Service, Army National Guard and finally from Cumberland County. He was a quiet man with many talents. Buddy was accomplished at woodworking. His love for the coast inspired him to build scale model replicas of boats as a pastime. He had a passion for photography and playing the guitar. He enjoyed leather crafting and jewelry making. There really wasn't much Buddy couldn't do. His family often refers to him as a master of all trades. In his later years, Eli was an active volunteer for Meals on Wheels in his community. Buddy encouraged his children and grandchildren to appreciate and enjoy the simpler things life had to offer. He was known for being calm, cool and collected and a devoted mentor to all who cared to listen. Buddy was a loyal man to his family and gave all of himself to those he loved unconditionally. He will be remembered and cherished by all who knew him. Eli was preceded in death by sisters, Jacqueline and Frances; and brothers, William "Bill" and Ramsey. Eli is survived by his devoted wife of 52 years, Maria Vasquez; and their four children, Timmy, Dolly Smith (Harold Braswell), Dede Betters (Mark Betters), and Katie Howard (Farrell Howard); six grandchildren, Tatiana, Nick, Jacqueline, Ben, D'Angleo and Elijah; and goddaughters, Ariel and Sarah. Family also includes nieces Sandy (Raul), Elaine and Jackie (Jerry); and nephew Nick (Linda). A memorial service will be held at 4 p.m. Thursday, Nov. 6, 2014, in Sullivan's Highland Funeral Service & Crematory.

The family of Eli Andrew "Buddy" Smith created this Life Tributes page to make it easy to share your memories.

Send flowers to the Smith family.