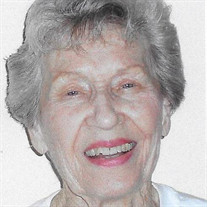 Mrs. Edith MacDonald Baecht, 89, of Carthage, died Saturday, May 23, 2015, in FirstHealth Hospice House. Mrs. Baecht was born in Erwin, on April 28, 1926, to James B. MacDonald Sr. and Edith M. MacDonald. Her family moved to a home just outside Cameron in 1932. Edith attended Cameron School graduating in 1943. She also attended Flora MacDonald College at Red Springs. She moved to Chapel Hill where she worked for a health insurance company. When World War II ended she and Warren E. Baecht married on June 1, 1946, at Cameron Presbyterian Church. On June 1, 2015, the couple would have celebrated their 69th anniversary. Her career was to be a homemaker raising three children and she will be missed by everyone. They lived in Chapel Hill for about 10 years before moving to New Jersey. When they retired in 1976, they moved to their home in Moore County near Whispering Pines. They began 30 years of travel visiting all 50 states, most of Western Europe and Australia, New Zealand and Tahiti. They also attended 23 Elderhostels including one in Scotland, home of her ancestors. Mrs. Baecht is survived by her husband, Warren; daughter, Karan Pierce; two daughters-in-law, Barbara and Gayle; three grandsons, Jeff and Mark, and John Pierce and his wife, Marcie; a great-granddaughter, Lauren; and her special niece, Nancy Neville Freeman. She was predeceased by her parents; sons, Brad and Eric; a daughter, Sharan; two brothers, James and Neil; a sister, Janet Neville. Memorial contributions may be made to North Carolina Zoo Society 4403 Zoo Parkway, Asheboro, NC 27705; or First Health Hospice & Palliative Care, 251 Campground Road, P.O. Box 2889, Pinehurst, NC 28374; or a charity of your choice. Arrangements are by Cape Fear Crematory of Stedman.

Mrs. Edith MacDonald Baecht, 89, of Carthage, died Saturday, May 23, 2015, in FirstHealth Hospice House. Mrs. Baecht was born in Erwin, on April 28, 1926, to James B. MacDonald Sr. and Edith M. MacDonald. Her family moved to a home just outside... View Obituary & Service Information

The family of Edith MacDonald Baecht created this Life Tributes page to make it easy to share your memories.

Send flowers to the Baecht family.