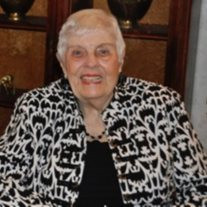 Pinehurst, NC – Denise A. Dauner, 90, died at ManorCare Health Services, Pinehurst, NC on February 25, 2014. Denise was born in Dubuque, Iowa, the daughter of Albert G. and Lenore Henneger. She attended the public schools in Dubuque, and graduated from Dubuque University in 1945 with a Bachelor of Science degree. While in high school she played the drums in both the band and orchestra. In her senior year she participated in local, state, regional and national drum competitions and won the National Championship. In addition, she was an accomplished pianist and graduate of the Dubuque Academy of Music. After graduation from Dubuque University she worked at Medical Associates in Dubuque; and then moved to Chicago where she worked for Abbot Labs in the research department for the next 10 years. While working at Abbot Labs she met Dr. Robert L. Wing who had established his dental practice in Lake Forest, Illinois. Bob and Denise were married for 39 years and spent their entire life in Lake Forest and a summer home in Whitewater, WI. Denise was a 75 year member of P.E.O., a national philanthropic organization, serving as president of local chapters in Lake Forest, Whitewater and Pinehurst. In addition, she enjoyed playing bridge and golf, and was active in these activities while a member of both the Country Club of North Carolina, and Pinehurst Country Club. In 1995, after being a widow for five years, Denise married Dr. Jack R. Dauner of Pinehurst. Both graduated with honors in the Class of 1941 at Dubuque Senior High School. Their families were very close friends and it was only logical that they return to St. Luke Methodist Episcopal church in Dubuque to repeat their marriage vows. Among the wedding guests were Denise’s mother, Lenore Henneger; and Jack’s mother, Pauline Rhodes Dauner, who were 97 years old at the time of the marriage. Both Denise and Jack had excellent previous marriages. Denise was married to Dr. Robert L. Wing for 39 years; and Jack to Carolyn Lee Wells of Davenport, IA for 47 years. Carolyn passed away in March 1994. After a long distance courtship Denise and Jack were married on June 24, 1995. Following the ceremonies Carolyn’s brother, Richard J. Wells and his wife Peg invited the wedding guests to a reception and dinner at Thunderbird Country Club. Denise was much loved by her husband, her family and her friends. She leaves a legacy of kindness, generosity of spirit and an insatiable love of life and discovery. Her family rejoices that she was in their lives and even though she has left this earthly life, they know she is now enfolded in the arms of eternal love. A memorial service will be held at the Community Congregational Church, 141 North Bennett St., Southern Pines, NC at 11:00 am, Saturday, March 8, 2014. Interment will be at a later date in Arlington National Cemetery, Washington, DC. She is survived by her husband, Dr. Jack R. Dauner of Pinehurst; son, Robert L. Wing, Jr. and his wife, Alecia of Mettawa, IL. Preceding her in death was a son, Thomas James Wing of Lake Forest, IL; and a sister, Adele Henneger Mims of Oshkosh, WI. In lieu of flowers, contributions in Denise's honor may be made to: First Health Clara McLean House Foundation, 150 Applecross Road, Pinehurst, NC 28374; Animal Advocates of Moore County (AAMC), 229 Ridgeline Drive A, Aberdeen, NC 28423; or Community Congregational Church, 141 North Bennett St., Southern Pines, NC 28387.

The family of Denise A. Dauner created this Life Tributes page to make it easy to share your memories.

Send flowers to the Dauner family.