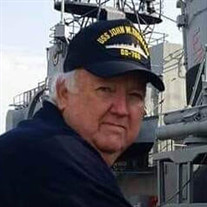 Dallas Dean Porter, 74, passed away peacefully surrounded by family on January 27, 2019 at Duke University Hospital in Durham, North Carolina due to complications arising from Aortic Valve replacement surgery and Agent Orange Disease. Dallas was born on May 22nd, 1944 in Aurora Illinois to Don and Elsie Porter. He was the fifth of their seven children: Donald, Dave, Dick, Dwayne, Diane and Denny. Dallas proudly served the country he loved as a Radioman in the US Navy during the Vietnam War where he achieved the rank of Petty Officer and received several medals of commendation. Dallas was very proud of his appointment as a member of the Drum and Bugle Corps where he played the French horn. He was honorably discharged in 1970. After the Navy Dallas attended college under the G.I. Bill while developing his startup telecommunications company into a successful business. An entrepreneur at heart, Dallas ran several businesses until his retirement in 2006. After Dallas’ retirement, in order to keep himself busy, he went to work part-time for his daughter's restaurant, the Mule City Grill in Benson, NC. While running the night shift at the Grill many of the employees thought of him as a father figure and went to him often for advice and counsel. After the Grill closed down, Dallas went to work part-time as CFO for Alkat Restoration of Benson, NC. AL Lopez, owner, credits Dallas with saving the business while many of his new hires thanked him for giving them a chance when no one else would. Dallas met the love of his life, Judy Sherwood, while stationed at the Philadelphia, PA Naval base. They were married June 15, 1963 and had 55 wonderful years together. They welcomed their daughter, Lisa Virginia, into this world June 5, 1967 and their son, Kenneth Albert on June 18, 1969. Dallas is survived by his wife, Judy; children, Lisa and Kenneth; grandchildren, Matt, Crysta, Kayla, Serena, Dakota and Tucker: great grandchildren Gabe, Ethan and Lawson; siblings, Dick, Diane and Denny. There will be a memorial service on Sunday, February 10, 2019 at 2:00 pm at Benson Grove Baptist Church, 6966 NC-50, Angier. In lieu of flowers, Dallas would have much preferred a gift to any of the Vietnam veterans associations.

The family of Dallas Dean Porter created this Life Tributes page to make it easy to share your memories.

Send flowers to the Porter family.