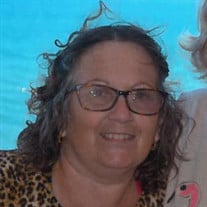 Cathy C. Russell Burke ("Sea Turtle" to her sister) was called to Heaven suddenly in her home, on Saturday, October 27, 2018. She was 56. She will be deeply missed by all the lives she touched. Cathy was born in Fairmont, West Virginia on December 28, 1961. She is preceded in death by her parents, Mary C. Barniak and husband Frankie of Fairmont, WV and John H. Russell and wife Francis of Farmington, WV; and by her husband and best friend, Tommy Burke; nephew, Bucky Russell; sister-in-law, Evelyn Russell Massey; brother-in-law, Rich Hoban; and half-brother, Richard Russell. She graduated from North Marion and worked for veterinarian, Dr. Kendrick, in Fairmont, WV. She had a big heart when it came to finding a stray; always took it in and tried healing it, before finding it a home. When she was young, we rescued a few Chipmunks, named them and raised them. She enlisted into the Army and was employed at Womack Army Medical Center as a Medic for 12 years. Cathy enjoyed many things like the West Virginia hills and Ocean Isle, NC. It was a beach she wanted to find time for. She loved the ocean, collecting shark's teeth and Olive shells and even getting her nickname from her sister, Judi,whom she called "Seagull". She loved spending time with family; knowing that when her and Tommy called Barb and Bill, breakfast would be waiting on them and having family picnics when she came home. Cathy leaves behind sons, Stephan Kelley and girlfriend that Cathy loved like a daughter, Elizabeth and Cody Burke, both of Broadway, NC and whom were her life and happiness; mother-in-law, Jean, known as Grandma Jean of Cameron, NC; brothers, Charles Russell of Mississippi, Bill Russell and wife Barb of Fairmont, WV; Herb Russell of Fairmont, WV; sister, Judi Russell of Clarksburg, WV; half- sisters, Ann of WV, Betty Jo of CA, Louise of OH, and their families; many cousins, nephews, nieces, great-nephews and great-nieces; close friends and neighbors. Per her request, she will be cremated; and at a later date, laid to rest, at the family's cemetery, The Vincent Cemetery on Vinegar Hill, in Fairmont WV., beside her mother and step-father. We know she's rejoicing and spending time with all our loved ones that have gone before.

Cathy C. Russell Burke ("Sea Turtle" to her sister) was called to Heaven suddenly in her home, on Saturday, October 27, 2018. She was 56. She will be deeply missed by all the lives she touched. Cathy was born in Fairmont, West Virginia on... View Obituary & Service Information

The family of Cathy C. Russell Burke created this Life Tributes page to make it easy to share your memories.

Send flowers to the Burke family.