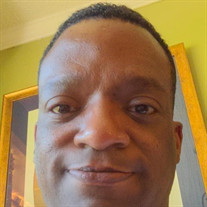 Anthony David Johnson, 46, of Fayetteville NC passed away on Monday, August 23, 2021, at his residence. He was born on February 16, 1975, in Cumberland County, NC to Donald Terry Johnson and Angela Kay Nash. During Anthony’s life, he traveled, made lifelong friends, and had many passions. Among those who knew him well know that he was extremely gifted. He built computers, created and managed websites and software, and was a math whiz. Basically if Ant was interested in a subject; his ambition was unmatched. Anthony was always the go-to-guy. And when it came to family, he was a natural. He kept in contact with relatives, and made sure to be a constant in our lives; even using Facetime to connect with his young second cousins, Jerry and Xander Phillips. Some may not have known this about Anthony, but he was a really good cook. He researched and planned his recipes and preparations to create the best dinners and desserts. Left behind to cherish his memory is his mother, Angela Nash; his father, Donald Johnson; his brother, Andrew Johnson; his sister, Angela Johnson; a niece, Hannah Lee; a nephew, Michael Lee; and a host of extended family members including- His cherished aunts- Ida Clarice Nash, Melva Rentz, Thomasa Bonner, Andrea Cole, Diane Newbill, Sheila Easter, and Cynthia Miller. His supportive uncles; Rodney Nash and Jerry Cole. And his many cousins- Ashley Hollingsworth, Kalin Ellis, Sydney Ellis, Alexander Rentz, Ida Marie Nash, Seth Nash, Sir Draper Newbill, James Easter, Steven Easter, Stephanie Easter, Veanna Thurman, Christopher Shaw, Jermaine Hughes, Antonio Seaberry, Sherita Hughes, and Jason Duke, and many additional second cousins. This outstanding family has been extremely generous and kind during this time, coming together to make sure Anthony is paid a proper tribute, and will always preserve Anthony’s life. A memorial service is planned for 2:00 P.M. on Saturday, August 28, 2021, at Family Fellowship Worship Center, with Pastor Davenport officiating. The family will briefly visit with extended family and friends following the service. Online condolences may be expressed at www.capefearcrematory.com. Arrangements by Cape Fear Crematory, of Fayetteville, NC.

Anthony David Johnson, 46, of Fayetteville NC passed away on Monday, August 23, 2021, at his residence. He was born on February 16, 1975, in Cumberland County, NC to Donald Terry Johnson and Angela Kay Nash. During Anthony&#8217;s life, he traveled,... View Obituary & Service Information

The family of Anthony David Johnson created this Life Tributes page to make it easy to share your memories.

Anthony David Johnson, 46, of Fayetteville NC passed away on...

Send flowers to the Johnson family.